In 2 days I take a trip to the Queen Elizabeth Hospital in Birmingham for my 5 year scans. I’m hoping the results will mean that I can be signed off from specialist care.
In 5 days I run my 1st (and last) marathon to mark the anniversary of my kidney cancer diagnosis. I don’t believe fate should be tempted, especially when I’m so close to the final hurdle so I’ll wait for results before declaring myself a cancer free zone. Crossing the finish line will still be a huge milestone. 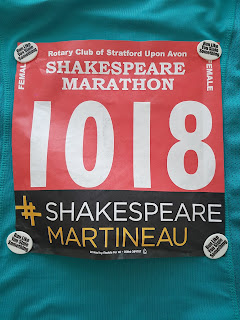 Over the past few weeks I’ve seriously doubted my sanity for taking on a marathon, the training has been gruelling at times. Coupled with the fact that I’ve had a couple of bouts of illness that have interrupted my running regime. I suffered with a cough over Christmas and New Year and most recently had an infection which took me off my feet for a couple of weeks. It began to look unlikely that I’d be able to run after all. Thankfully I’ve managed to bounce back from both and take up where I left off.
This weekend I finished my tapering runs and for the first time in ages felt the enjoyment of running once more as it was a gentle 5 miles. I just don’t think I’m made for long distance running. For one thing it drains me of energy both during and after. It’s boring, after mile 6 I begin to wish I was back home doing something more interesting. It makes me way too hot, a mile in and I’m cooking so by mile 15 I’m on fire! Apart from all that I just don’t see the point. Rather than keeping me fit it’s playing havoc with my joints and back. I’ve had to change my diet by increasing carbs then taking in protein. This in turn has meant my shape has changed, I’ve never had thighs this big! On top of that I’ve gained nearly a stone, how does that figure when I’m running for around 5-6 hours a week at least?
Today I was visited by a photographer from the local newspaper. I contacted them to see if they would cover my story and they wanted a picture of me in my kit. I’ve received a lot of support online from the organisers of the Shakespeare Marathon who are going to announce me at the start line. My Total Giving page has nearly reached £1,300.00 which is above and beyond what I’d hoped to raise and the support keeps coming. The KidneyCancer Support Network have sent me a teeshirt for the day and have been cheering me on from day one as have Jon & Sarah Birchall for Facing up 2Kidney Cancer. It only remains now for me to run that 26.2 miles.
Now, as the day gets closer I am reminded of why I took on this challenge. The fact that my 5 year scans fall only 3 days before the event makes this even more poignant.  I had hoped for those 3 little words prior to my run, No Evidence of Disease but I’ll have to wait until June for the appointment that delivers that news. Support from my family and friends has been tempered by the concern they feel for the task I have ahead. I know this isn’t going to be a walk in the park.
Thanks to everyone who’s sponsored me so far and given me so much encouragement. This final stage is all down to me...
Donate here My Unfashionable Cancer Marathon