In the 12 months since my discharge from the Queen Elizabeth Hospital, Birmingham, I have done my utmost to distance myself from kidney cancer. This has not been easy.
For one thing, it's brought a lot of guilty feelings surrounding the support I received as a patient. I was fortunate to discover Kidney Cancer UK and the Kidney Cancer Support Network, both of which offered unfailing help and excellent advice. Having been an established Twitter user prior to kidney cancer due to my fashion business, my followers were subsequently given lessons in medical terminology when my cancer diagnosis was made; hence the fashion victim to cancer survivor tag. Getting signed off was like being cut free and as such, I dropped away from the group pages and forums that had been there for me during treatment. It makes me feel I've turned my back on others needing that support now. I just needed normal, without cancer if that makes sense?
I did, however, discover running during my recuperation which in turn led to some fundraising. Again, my Twitter feed became a source of running and nutritional posts during this two year period as I went from 5K to a marathon, raising over £2,000 in the process for the charities. It also introduced me to Facing up 2 Kidney Cancer another charity that gave me wonderful support.
Getting back to work post-cancer wasn't easy. I had a couple of false starts following health setbacks and a drop in confidence. The fashion industry is a fickle business as well as being extremely superficial, at times it just didn't sit right with me. I sold my vintage stock and dropped the tribute work to concentrate on the ethical side of my business, reworking and upcycling clothing. I then switched track completely and went forward making activewear, influenced by my running habit and new found love of yoga. Before too long I was doing both and the pop fashion was creeping back in. Now I pretty much do it all! One business idea I am proud of is the hospital gown design I created. Obviously, this stemmed from having to wear so many gowns myself that I determined to make a more user-friendly option. The Coverstory Dignity Gown is still in its infancy but will definitely remain part of my business thanks to my kidney cancer experience.
In hindsight, I do feel I can thank kidney cancer for my new direction. There were lifestyle changes I needed to make. A cancer diagnosis is a drastic way to stop you in your tracks but it gave me more to live for.
Writing has always been a part of my life and post cancer it was a natural way to make sense of what happened. The blog progressed and became the start of a book which led me to join Tamworth Writers; another positive step forward.
I can't write and update without mentioning my current health status. As a patient, I researched frequently what the prognosis of a kidney cancer diagnosis would be. My tumour was 7" and contained in the left kidney. When it introduced itself it haemorrhaged, which is why my diagnosis was sudden and shocking. I had no symptoms that I can remember so being rushed via blue light ambulance that morning was a total head f**k. Maybe because of that, I'll never be entirely confident everything will be ok. I was left with some nerve damage as the surgery was invasive due to the large bleed, this has left me with ongoing back and abdominal pain. I get frequent water infections, not sure why? I have regular blood tests for kidney function and have recently had issues with substantial bruising, again not sure why (I've not been fighting). All in all, cancer in whatever form it takes never really leaves you. They can cut it out, zap it with chemo and radiotherapy or feed you concoctions of drugs but the seed of it remains. Whether you choose to believe that is a real entity or just the seed of fear in your head is again not of your choosing. On good days it's a bad dream on others it's as real as a diagnosis. That is my experience and the legacy kidney cancer left.
On a final note, I'd like to thank the Tamworth Wellbeing & Cancer Support Centre which I've visited frequently. The work they do there is incredible (and they now have the coolest charity ambassador in Joe Lycett!) From the first time I stepped through their doors several years ago I had an epiphany, that realisation that I was part of a select group, I had cancer. Before that, it was someone else's problem, another person's illness. Cancer introduced me to some of the kindest most thoughtful people I've ever met, many form this wonderful charity.
For everyone else who has entered my world as a result of kidney cancer, thank you - life wouldn't be the same without you.
Debbie XXX 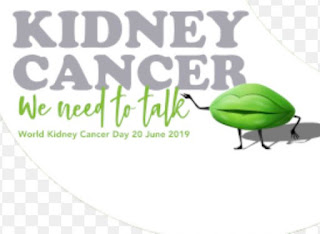 Posted by Debbie Murphy at Thursday, June 20, 2019 4 comments: Links to this post