Running For My Life

When I was about 10 years old I joined the local athletics club partly because I'd won a few sports day races and partly as my best friends Dad helped run it. Over the next few years it was decided by my trainer that 800m was my race and I continued to do well at school and county level.
That was until that same friend introduced me to Benson & Hedges and Merrydown cider which didn't compliment my sport and I began to lose interest. Although still only a teenager I thought I'd done enough and almost felt I'd grown out of athletics, if I knew then...
I really can't remember running again after that unless you count the kids parents race at school which was more wrestling than running. Oh and I did win a teeshirt from O'Neills some years ago for being fastest from the bar to the shoe shop opposite and back - not one of my finer sporting moments.
Whilst recovering from kidney cancer I've had continual back pain and issues related to my surgery which I have tried to help with physio and yoga. I still felt I could do more though, I needed to see how far I could push myself which is why I decided to try running again.
After 30 years it was a strange feeling getting back out running albeit on a road rather than a track but straight away I loved it. It was as if a light went back on and I remembered that feeling of exhilaration when you've reached a target.
As I've gradually increased my number of runs per week and my distance so it is I've relaxed into it and am feeling so many benefits. The health issues still lurk around in the background but when I'm running they pale into insignificance while I concentrate on everything but.
It's been 8 months now and I run 3 times a week usually 2.5 miles twice a week and then a 5k (I'm a dressmaker so mixing metric and imperial measurements is compulsory). I've begun to get 'the gear' even switching from my beloved adidas to asics and going out in lycra in daylight. Most essential has been my water bottle as I've discovered that one kidney needs that extra hydration, probably the only downside to running longer distances.
When I was an 800m runner and doing particularly well I had a wonderful gift from another school friend. My maiden name was Florence which led to a nickname of Flo and after a particularly good win Jenni presented me with a teeshirt with 'Seb Flo' printed on it as he was a hero of mine at the time. I mentioned my return to running to her recently and pointed out I've increased my distance and therefore I may need another teeshirt printing, maybe Flo Farah?
Earlier in the year I took part in Race For Life and completed the 5K coming in the top 10 much to my amazement. I couldn't believe the buzz I got from competing again although I know it's a charity event I was absolutely driven to keep going. I knew then I'd have to do it again which is why I've entered the City of Birmingham 10K.
Since entering I've had only one practice at the full distance with a couple of 4 mile runs thrown into my regular routine, I know it won't be easy. The thing is though, when I run everything else goes away and I'm totally in that zone, I have to keep going. I've written before that it's almost a feeling that if I keep going everything is all right, if I can run then cancer can't catch me. If only it were that simple but if ever there were a reason to run, I really am running for my life.
I'll be running my 1st (proper) 10K this weekend and money I raise through sponsorship will go towards a kidney cancer research project chosen by Facing Up to Kidney Cancer. I've received tremendous help and support from The James Whale Fund for Kidney Cancer and I hope I can help their charity at the same time as doing something I love.
I am running because I've had kidney cancer and not despite it and that is my biggest achievement.
If you want to donate please go to my Just Giving page.
Thanks, Debbie X 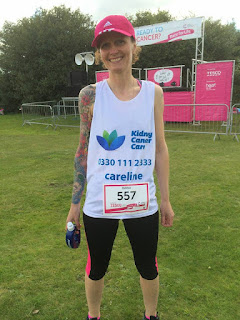 Posted by Debbie Murphy at Thursday, September 03, 2015 No comments: Links to this post