Before my kidney tumour made itself known I was blissfully unaware I was even remotely unwell. In fact I was on a mission to improve my general health and wellbeing as far as I could and had been exercising regularly.
Now this didn't involve a gym and I hadn't started yoga or running at that time but I did walk about 10 miles a week. I would also do some general exercises which included, the plank.
The night before I was taken ill I had been on a decent walk and returned to do a few exercises and when it came to the plank I had pushed that bit further to 2 minutes (not bad eh)? I can't remember feeling any differently and in truth wouldn't know for sure that this was what kicked off the bleed but, in the absence of any other explanation it's a decent guess.
So many times I've asked the question 'Why?' and doctor's have said there's no solid explanation but they haven't dismissed that by pushing myself that bit further the night before the dreaded plank may have done me a favour.
Fast forward to February this year and I finally (after talking about it for ages) began a yoga class. I'd been having physiotherapy for pain in my lower back resulting from my surgery and yoga had been suggested as a way of helping manage that pain.
I went along to Midlands Yoga not really knowing what to expect but having a preconception that the moves would be very steady and relaxing. What I hadn't counted on was that one of those 'moves' would involve taking on 'The Plank' 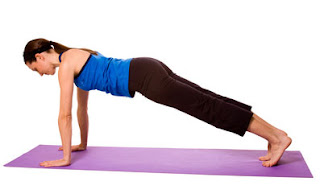 Now don't get me wrong, the yoga class was fantastic so much so that I've returned weekly ever since, what I haven't done is reveal my fear of the plank. It wasn't until I came to strike that pose that I realised the significance of it, this is what could potentially have saved my life. The fear stems from knowing that it could possibly have helped start the massive hemorrhage that led to the discovery of my kidney cancer.
I guess I'll never know but this week, for the first time I went into plank position and that fear didn't cross my mind. Maybe I've finally overcome it, another psychological hurdle over.
Yoga for me has been about so many things, managing the back pain, strengthening muscles, better posture, helping with sleep and relaxation etc. One of my personal goals is to once again be able to touch my toes which I've not managed yet but I'm enjoying doing headstands again after over 35 years.
I hadn't imagined it would also help to take away some of the pain associated with my memories of when kidney cancer changed my life, but it has. (Thanks Gemma xxx)


Posted by Debbie Murphy at Saturday, July 25, 2015 No comments: Links to this post